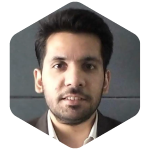 Deepanshu Khandelwal is the Chief Executive Officer for Catalyst AIC. He leads the overall administration of our center based out of Jaipur and manages activities and programs within Catalyst, in close coordination with our launch partners, Atal Innovation Mission at NITI Aayog.

Prior to joining Catalyst AIC, he was with EY’s Transaction Advisory Services. During his tenure at EY, he was a part of the core team for iStart – Government of Rajasthan’s Startup Development program. He was also heading strategic partnerships for the program. Additionally, he was instrumental in setting up EY teams for similar Startup projects in Haryana and J&K.

Deepanshu has had a diverse entrepreneurial experience since the beginning of his professional career. He has worked with a healthcare startup as their Director of Operations for Rajasthan, leading a team of over 200 employees and helping the company scale up operations across the state. Under his leadership, the company achieved an annual GMV of INR 20 Cr. from business within Rajasthan, and opened multiple offices across Ajmer, Jodhpur, Bikaner and Kota.

Deepanshu is also the founder of popular global technology news platform, The Tech Portal. He acts as a Consulting Editor now and is a director and shareholder in the parent company. Under his leadership till 2017, the media venture raised multiple rounds of investments from prominent investors in Delhi and Rajasthan. The venture is among very few digital media companies in India to have turned profitable.