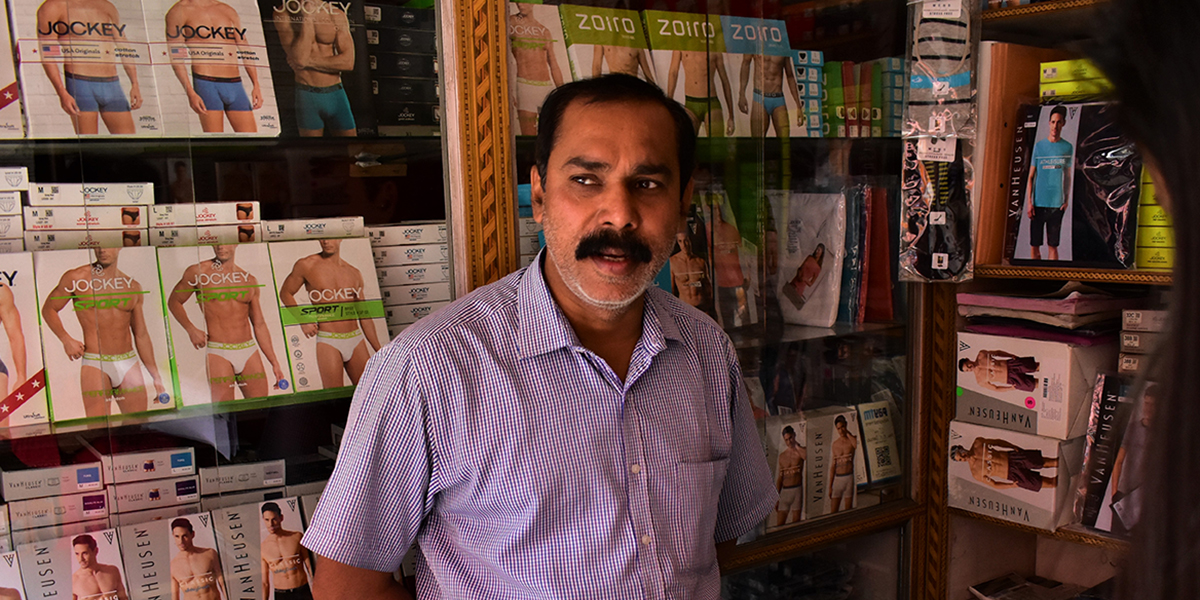 In BHIM we trust

“If we see monetary benefit in using a digital payment application, we download it. If we see customers demand digital payments, we learn more about them.” Sanjiv Kapoor’s sentiment on how transacting digitally has become inevitable resonates with several other small merchants across Barkat Nagar Market in Jaipur.

Sanjiv runs a garments store in the market, which was established in 1984. At any time of the day, this 51-year old can be seen dressed in his formals, attending to customers happily. A typical business day for Sanjiv starts at 11 am, and ends at 9 pm. His enthusiasm for the business is evident in the rapport that he shares with his customers, who often take his suggestions and consult him on matters. He considers himself a simple man who cares about his family and does all that he can to provide for them. His two children are a source of great pride for him. His son is currently pursuing a degree in computer science engineering, while his daughter is doing her Bachelor’s in business administration. His eyes gleam with pride when he talks about his wife, who runs her own children’s wear business, which he helped her set up in the same market a few years ago.

BHIM QR – A SYMBOL OF TRUST AND CREDIBILITY

Akin to most other lower middle class families in the area, Sanjiv keeps himself updated with the latest happenings around the world by reading the newspaper and watching television. “I saw the launch of BHIM QR on television. The trust and credibility associated with government initiatives motivated me to want to use yet another mobile application. It is attractive to have the convenience of account-to-account transfer along with zero rental/ transaction costs,” says Sanjiv.

The reassurance from Catalyst’s awareness camps* and representatives in the market also facilitated several merchants in the vicinity to successfully download the application for business use. After consulting with other merchants in the market, one gets the sense that there is a common perception of the BHIM QR code as being a convenient, low-cost medium for the acceptance of digital payments in the area.

*In October 2017, Catalyst conducted a series of awareness initiatives and an on-boarding camp around Government of India’s BHIM application, and its QR code functionality. The intervention also introduced incentive schemes for merchants and customers, to test their impact on increasing adoption and usage.

In residential markets such as Barkat Nagar, the relationship between a merchant and his customer is very important. In October 2017, Catalyst conducted a series of awareness camps around BHIM and its QR code functionality, and introduced incentive schemes for merchants and customers. From December 2017 to January 2018, Sanjiv reported nearly 60 transactions via BHIM QR code. Sanjiv has also nudged his customers to download and adopt the BHIM QR application after on-boarding them on the incentive schemes introduced by Catalyst.

“Most customers want to download and understand digital payments, and I help them to do so. I have told all my customers to use the BHIM QR application and two of my customers even won a cash prize of Rs. 1,000 each as part of the incentive scheme introduced by Catalyst!”

The only setback was that not all of his customers had the application installed on their phone or the time to download it. Nevertheless, Sanjiv’s experience reiterates the potential small merchants may have to act as change agents and digital influencers in their ecosystems. Experiments across a cross-section of merchants and across geographies may validate this hypothesis.

Sanjiv sees value in transacting digitally, as these payments can mitigate issues associated with cash such as fake currency in circulation. However, he believes that the ecosystem for universal BHIM QR payment acceptance needs to be strengthened. Penetration of digital payments among customers is still very low and the market ecosystem is unattractive.

Moreover, while all applications have similar features, the one that offers more lucrative cashback rewards to customers sees the widest usage.

Sanjiv believes that “Customers are more attracted to schemes. While they love cash, if a lucrative scheme is introduced for digital payments, they are ready to try it out and move out of their comfort zone. It is very important to keep the customer engaged.”

On being asked what he thinks about the future of digital payments he says, “Digital payments will pick up exponentially in India and they will be beneficial to all. However, it is important to make digital transactions more attractive for customers and make them aware of these benefits.”